The best of both worlds: a PhD in industry 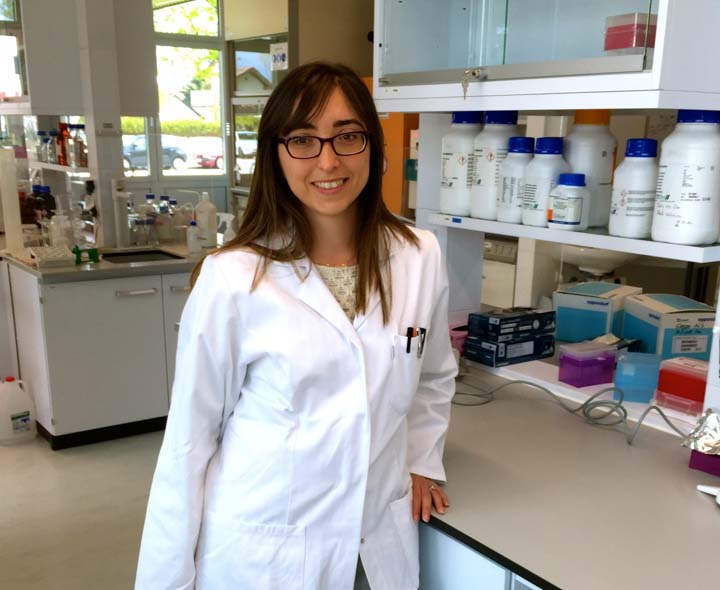 Valentina Cassinelli is about to finish her PhD in industry. She works on DNA nanostructures at baseclick, a small biotech company in the Munich area. She shared with us why she picked a PhD in industry and what her experiences are.

Why a PhD in industry? And, why in Germany?

Actually, it wasn’t an active decision to do a PhD in industry. After obtaining my Masters degree in industrial biotechnology, I worked as a researcher at a university in Italy for 1.5 years. My temporary contract ended and as everyone knows the labour market in Italy is a very tough one at the moment, hence I had little job prospects there. Instead of sitting at home dreaming about a career I was not having, I decided to try my luck in one of the largest biotech parks of Europe, namely Munich. I moved to Germany and started sending open applications for researcher jobs to several biotech companies. Then, I was invited for a job interview at the small biotech company baseclick who just happened to have had a positive feedback from the Marie Curie research fellowship they applied for. They told me during the interview that they were looking for a PhD student and asked if I would be up for it.

Was it easy for you, as a foreigner, to find a position in Munich?

I wouldn’t say it way super easy. I quickly realised after arrival that it would be hard to find a position outside of academia without speaking the local language. I think that as I just happened to have sent an unsolicited application to baseclick, and coincidentally had the background they were looking for, I have been very lucky. In total it took me only three months between arrival in Germany and getting the offer. There were another few months between the offer and the actual start of the PhD, which I used to study German.

Being invited based on an unsolicited application… Does that mean you did not have any competition for the same position?

No, I did have competition. They told me afterwards that they had many more applications coming once they wrote the PhD position out. But lucky me, I coincidently had the background they were looking for.

My main aim was to transition from academia to industry.

You signed up for a PhD position but were actually looking for a “normal job”. Why did you go for it?

My main aim was to transition from academia to industry. I therefore did not really consider doing a PhD. But once I got the opportunity presented to me in a company I really liked, I got very excited about it.

You are the end of your PhD. Are you still excited about it?

Definitely! I think it is a very good way to do your PhD. I learned a lot about industry; product preparation, shipping, customer contact, etc. At the same time, I have still been very much attached to academia; doing research, publishing, conferences and participation in research group meetings. I really had the best of both worlds!

Publishing, conferences and participation in research group meetings… how does it all go together?

My PhD is part of the EscoDNA (European School of DNA Nanotechnology) network. This is a network of researchers from industry and academia funded funded by the European Commission under the Seventh Framework Programme (FP7), as part of the Marie Curie Initial Training Network. Within this network there are certain requirement. For example, I need to attend one international conference a year. We agreed as well that I could publish my research, and I did. I have three publications already and am currently writing the fourth. Furthermore, I am enrolled at the university so I can participate at activities around their PhD programme as well.

You need to have a supervisor within academia. Did you have to search yourself or was it set up beforehand?

My academic supervisor I had to “search” for myself. Now that might sound like a challenge, but as the company baseclick has been founded by Prof. Thomas Carell, a well-known scientist at the LMU University, and my day-to-day industrial supervisor Dr. Antonio Manetto did his PhD with him, it was obvious to ask him to be my supervisor. And, he accepted me.

What role does your academic supervisor play in your PhD?

I am participating in the weekly group meetings of Prof. Thomas Carell´s research group. I know the PhD students there and they know me. I present my work once a year and get feedback and input on my research.

Can you speak freely about your work during the academic group meetings?

Generally, yes. If I would really be working on a new product that baseclick wants to bring to the market this might be different, but I mostly work on existing products and use methods that have been IP protected by baseclick.

I have less academic freedom but can still, as long as the budget allows, follow my scientific interests.

What distinguishes an industry PhD from an academic one?

The research itself is more applied, which I really liked. I have less academic freedom but can still, as long as the budget allows, follow my scientific interests.

The work environment is totally different from academia. I was the first PhD student at baseclick, and for a long time I have been the only one. The other people are employees and might not all share the same research background. Of course, I could have daily scientific discussions with my industrial supervisors Dr. Antonio Manetto and Dr. Thomas Frischmuth, but it is different than in academia where your whole environment is in the same boat. At the beginning I was struggling with that, but as I got to know the PhD students in the group of Prof. Thomas Carell and some bachelor and master students arrived at baseclick, I dealt with it better. Today we even have a second PhD student at baseclick, so it is not an issue anymore at all.

For safety reasons, no one is allowed to work alone in the lab at baseclick. That means that in contrast to academic PhD students I had much less flexibility in my lab hours. Again, by having a second PhD student now, these time restrictions are less of a challenge as we can now work late together. On the positive, by having this inflexibility to start with, I gained great time-management skills!

Would you recommend others to choose a PhD in industry?

Yes! It is ideal if you think about transferring from academia to industry. You get the industry experience employers are wishing for and at the same time you can still go back to academia if you decide for an academic career. And, finally I will get a Dr. title, which might play a decisive role in my future career.

You are about to finish. What’s next? Back to academia?

I don’t know what will come next, I still have a few months to find something. Probably not academia, my passion is in industry. But hey, three years ago I also did not think about doing a PhD! There is always something happening on one´s path!