In the job interview: Braving the gaps 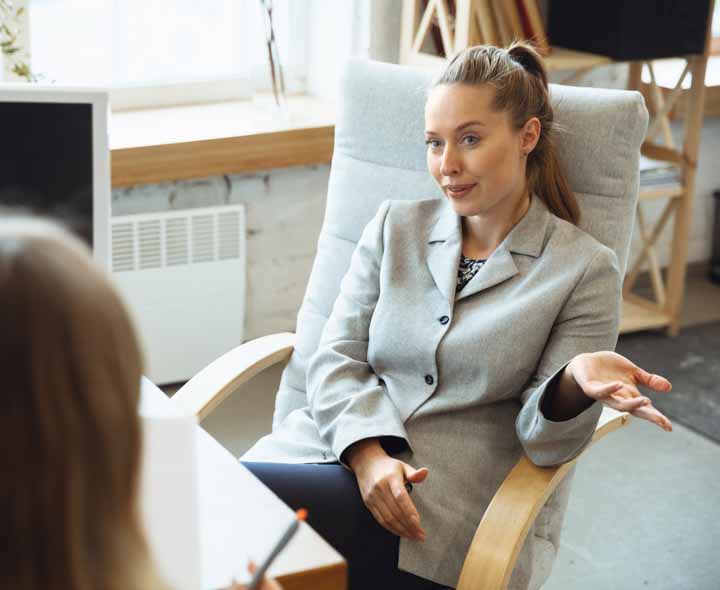 It´s really hard. I am looking for the perfect replacement for this open position for four months now. In the beginning, I was still dreaming of the Allround-Mr-Perfect, but I left this notion far behind me by now. I would already be happy if I would glimpse some potential for this Allround-Mr-Perfect.

A lady is the first one today. “How would you solve this task?” I am asking her and move the all-too-familiar sheet with the numbers towards her in what feels like the 100th time for me. The lady looks at the table and explains every detail to me. “Good,” I say. “I see that you are fit with numbers. We need someone like you. Someone who understands her craft and the details. Now imagine the department head would call and wants an update about the latest data. What do you tell her?” She looks at me, insecure. „I would definitely tell her that we´re on a good way. I could send her the table, then she would have all details at hand.” I silently tick her off. What a pity. I would have loved to get some femininity into my team. However, I don´t think she´s able to think from the side of the department head, just as I have my doubts that she could stand up to opposition.

Next in line is the former IT sales rep. He shakes my hand elegantly, bows slightly and takes a seat. An old-school gentleman, I think for myself and feel a certain connection. The same game as before starts all over again, I hand him the sheet with the numbers across the table. He takes a look and excuses himself, “Just a moment, please, I would like to check the numbers in some more detail.” I like that. Starting by collecting the facts quietly. Some minutes later, he puts the table aside, looks at me and says, „If you were my department head, I would immediately point out that we´re steering right into a deep budget gap towards the end of the year. At the same time, I would indicate potential solutions for how to minimise the risk.” I am speechless. He´s exactly who we´re looking for. Someone, who has the big picture in mind and doesn´t get bogged down in details. I test his enthusiasm and his ability to take criticism. After all, I want someone, who is passionate at work and can confidently handle criticism. He enthusiastically tells me about his idea to develop an app to automatically refill fridges. “That´s got no direct link to the job he´s supposed to do here in drug development” I think to myself. Confronting him with my thoughts, he shrugs and later on bids farewell with the words “think about it”. He waives the handshake this time around.

The third one is a somewhat younger man. “Nice” I think for myself, “he would also fit into our team.” In contrast to the other candidates, he´s not wearing a suit, but instead has his sleeves tucked up and wears jeans. “He presumably saw our internet campaign” is going through my mind, in which our CEO was photographed in similar attire. I forgive his fauxpas and test his knowledge with the famous table. “You know” he says, “I never did a budget analysis before. It would therefore be a bit put-on if I would attempt an analysis here. But I can tell you one thing: I absolutely want this position. What do I have to do to learn how to evaluate this table? I promise, that I will do everything to learn this as fast as possible.” I am quite stunned. Daring, but somehow also smart, I find. „At least he has some guts” I think and test his reaction to criticism. All fine. I try some more. Is he really the way he appears? I play my joker and get my colleague into the room, who shall catch him off-guard. In contrast to the previous applicant, he sails through that one as well. Confident, he accepts the criticism and stays friendly even when we let him know, that he absolutely doesn´t fit our picture due to his lack of specialist knowledge. In the end, he shakes our hands with the words, “Thank you very much for your time, I liked it here anyway.”

Somehow, the last applicant sticks to my mind. He could make us believe that he is smart, that he can cope with people and that he is very keen on the position. I have trust in him that he will catch up with the missing know-how in a few months, I somehow feel this. Content, I close my office door and walk to my car. On Monday I will call him and tell him that he has the position.

Our blog Author writes under the alias Lisette Feldmann. As a PhD scientist she works as modern leader in a large multinational. Privately, she tries to strike a balance between family and career.

Interested to learn more about this topic? In our Career resources, you can find many commented Interview questions.

In our article Verve, ownership and team-work wanted! we interviewed an HR manager about her view on the application process.